I’m sending midi wirelessly via BomeMT using RTPMIDI through my MS surface Pro to change programs on harmoniser module. Just lately, the messages have stopped getting through to the harmoniser. I’m wondering if I can get rid of RTPMiDI and use something else. I have Bome Network. Can I use that? Any help would be great.

I'm not sure if MT Pro was tested with MS Surface Pro? You can try loading BomeNet on it ans let us know. I Think MS Surface Pro runs Windows 10 so I would think it might work.

If you are talking about iPad (as shown in the title), it will currently not work with Bome Network however we are working on a release of Bome Network Pro for iOS. We will let users signed up for the newsletter know when it becomes available.

I’ve been using NT Pro with the Surface Pro for a while. It works well. Do you have a timeline for the iPad software being worked on? Also, I’ve never really understood Bome Network, but I did buy it to try and streamline things. Are there any simple instructions available where I can read up about it?

Good news that it works on MS Surface Pro! Not much documentation (or even needed) on Bome Network. It basically discovers any other instance running on the network and then either asks you confirm a connection or if you go to the menu tray where Bome Network resides, you can initiate a connection. Once the connections are initiated, they self discover each other each time you start Bome Network.

Here is a tutorial.

Thanks Steve. Your tutorial talks about having a Bome Box. I don’t have one of those. Can I still use Bome Network without it? Also, is the Bome Box a hub of some sort? What is it used for? Would it help me if I bought one?

The BomeBox is indeed a MIDI router. Some people use it to use MT Pro without a computer if they don’t want to take a computer to their performance venue. Others supplement their MIDI network by adding BomeBoxes. For instance they might put lighting on one, and tie to their DAW with another. You can attache multiple MIDI USB MIDI devices via a USB hub connected to BomeBox. Each BomeBox also has a MIDI DIN in and out port. For me, I tie several MIDI keyboards together so that I can use them to redirect which board I’m playing at a given time.

Even though this is an old topic… but whoever is stumbling on it, I wanted to share the news that we’ve released Bome Network for iOS and iPadOS now: 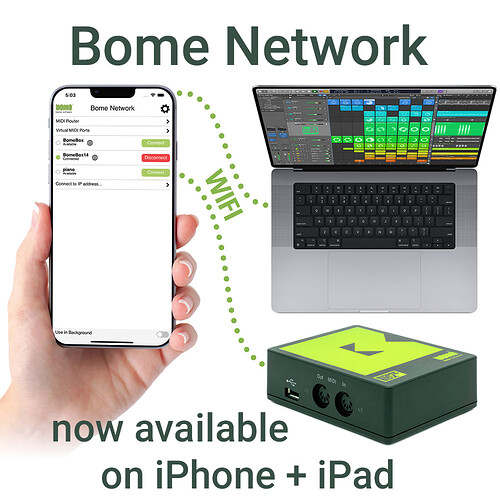