Bome Network Pro: "Virtual In" could not be opened

I needed to fire up a very old Windows 10 PC (named smart-HP) to work with Kontakt 3.5 sounds, and I installed BNP in it. BNP in smart-HP sees my Surface Pro and connects to it just fine. However, I get the following error message in the Surface Pro;

I ran the Uninstall Korg USB-MIDI device app in both machines just to make sure that I don’t have too many MIDI devices. I reinstalled BNP virtual port a few times. Still the same issue. Anything else that I need to look into?
Thanks in advance.

For Bome Network Pro, there is an addon you can purchase called “Unlimited Virtual Ports” that allows you do do advanced routing between ports.

The below example is how I currently have my PC set up. On only enable the routes I want when a given controller is connected. In this example I can rout my iCON iControls and nanoKontrol2 to a port call “Mackie Controllers” and use them simultaneously.

I also have routings from my Pacer Foot controller so I can both use the foot controller and update the setting through Web App. I just don’t push buttons on the controller when using the Chrome Web App. In this example Pacer 1 is my physicall controller but O route it to to Virtual Ports.
F-Pacer, and Pacer-Chrome. My Virtual Port names are of my own naming. 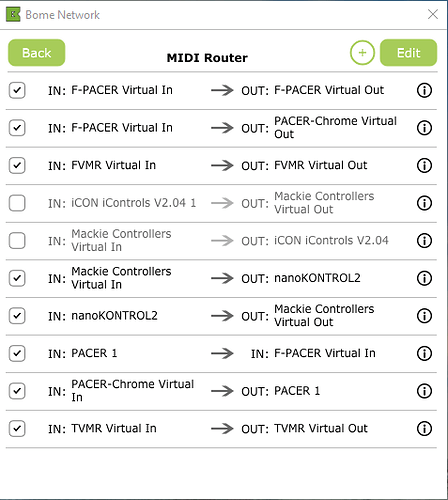 Here are my Virtual Ports. Steve Gaming, BomeBox2 : and Stevens-MacBook Pro are ports created by the other devices on my network. The others were created by me. 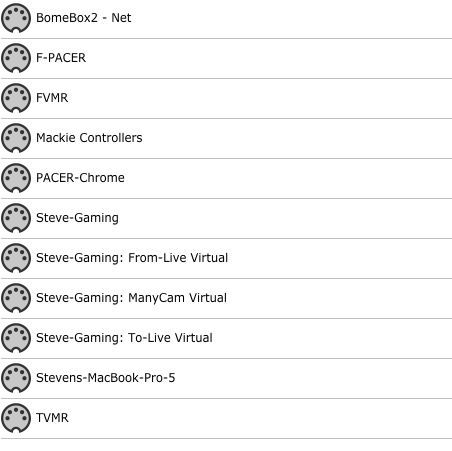 Thanks for your reply, Steve. I do not see any midi app running behind and hijacking BNP in my Surface Pro. I installed the beta version, and now BNP allows the Surface Pro to connect to smart-HP, but the problem is that none of my DAWs can see smart-HP as a midi device. I suspect that it’s some leftover MIDI-related junk in my Surface Pro. When I opened Device Manger, I see the following under “other devices.”

What version of Bome Network Pro are you running?

All but the latest version exposes only one connection per host. You can download the latest Beta Version here

The latest version allows you to expose multiple ports across machines. This features is called Remote Direct MIDI.

In the below example, I can actually open a Mac IAC port over the network from my Windows PC 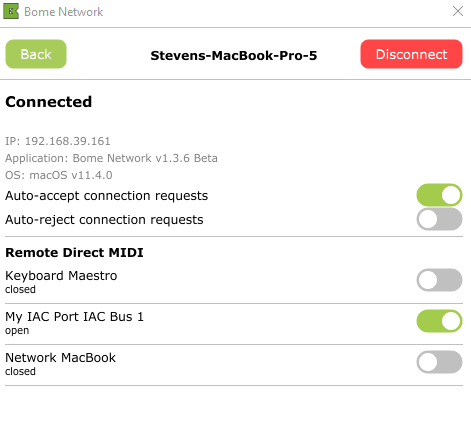 You can see the IAC port on my MIDI Ports Screen. It is the second from the bottom. 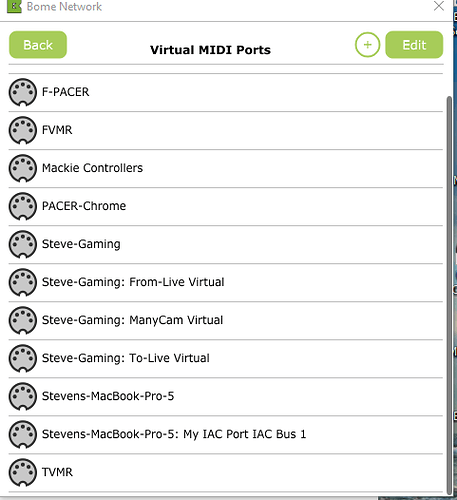 Now that doesn’t mean multiple applications can open the same port. To do this you need to give your applications each their own virtual port. Since you have MT Pro you can use that.

In the below example, I open the remote port with MT Pro and provide copies to 3 applications using Bome MIDI Translator Virtual Ports. They cannot connect directly to the original port, but MT Pro routes to alternate ports for your other applications to use. This is to overcome Windows inability to have multiple applications access the same port. 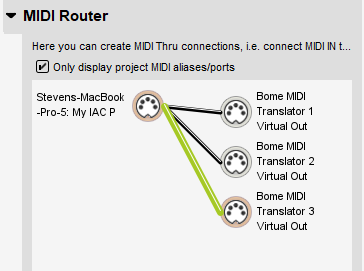 I hope this clears things up.

Wow, a lot to digest. Bome Network Pro 1.4! Thanks, Florian, for the triple updates! Steve, I installed BNP 1.4 in all my computers. My Macbook Pro can send midi to smart-HP or from Surface Pro to MBP and then to smart-HP. BNP in Surface Pro shows smart-HP is connected, but I do not see it in DAWs. So I know BNP is not at fault but something is up with my Surface Pro. As much as I like Windows, it can throw you a curve ball at times when it comes to midi.

You should be able to since Surface Pro is based on WIndows, right? of course you will need to have the Pro version to communication directly between computers although they will still show as connected.

Oh and curve balls is what makes like interesting .