Hey folks,
added now a couple midi control shortcuts to my Novation Launchkey to open apps on my Mac Mini.

Turns out, after opening the first app, MTP is kind of “blocked” or “waiting” till I shut down the app I opened via MTP. When I close the app, MTP is working again and also all shortcuts are working … till I open again an app via MTP.

Do I have to pass a param, so MTP is not stuck here? 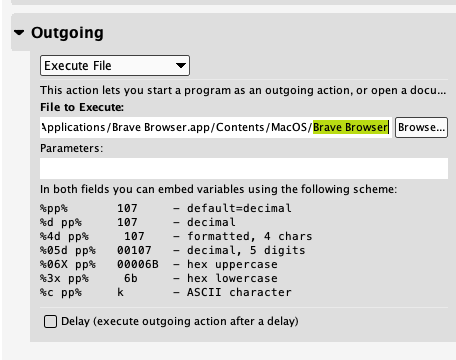 Is this true with different applications or just with Brave Browser? It may be that it only will open one instance. If you want Brave Brower to open a web page, maybe you can enter the web page itself and it would open it within your default browser. Alternatively, you can leave the file to execute the same and enter the desired web page as a parameter (in quotes).

It is also true with other apps (MS ToDo, Sublime Text).

Let’s say after that, I press the following shortcuts:

Hi Daniel, as mentioned in the other thread, MT uses the open command internally. So instead of going into the application bundle to the actual binary executable, you can run applications by just passing the bundle:

I think that this should launch the application and return immediately.

For all other cases, see the other thread for more options:

Hi Daniel, sorry to read this! I don’t know why Franz is crashing like this. Could you paste the full crash report here? Internally, MIDI Translator Pro uses the open command to execute the given application, e.g. open '/Applications/Franz.app' You could try if it’s crashing when launched with the above command from a Terminal window. In general, though, I think that the creators of Franz would be best suited to fix this issue. Let us know what you find out. Thanks!

Alright. The reason why I went into the bundle was using the “Browse”-Button next to the input field, which did not allowed me to select the .app since MacOS recognises the package/folder structure within it, so a bit of a UX challenge here.

so a bit of a UX challenge here.

indeed… and actually, invoking the binary executable directly should not block the MT execution queue.