First off, I will say that BMT can absolutely be used for this purpose and I don’t mean to impugn its unapproachable reputation… but the solution to my specific problem can’t (yet?) be handled by BMT in an elegant and maintainable way, so…

Does anyone know of software (Mac, but would work with Windows or Linux) which allows for the grouping of a large number of MIDI commands to be assembled in a graphically-understandable way and sent through MIDI ports to multiple devices?

For context, I would use this app as a ‘Defaults’ engine on stage. I would trigger a song or scene selection from my Set List app on iOS, send a Song Select or Program Change via Bome Network Midi to Bome Midi Translator on a Mac Mini, and use BMT to open a Logic Project specific to the selected song. The Logic Project will handle automation and sync of lights, program changes, mixer routing, haptic and IEM click, backing tracks, and video.

However, my band does not stick to setlists. Each time a new song is selected, the previous song’s project automation has left our system in an unknowable state. For example, if I’ve triggered a four-part-harmony vocal harmonizer patch in the previous song, SOMETHING must ensure this patch is shut off before the next song starts, or I’ll end up going full “Carry On Wayward Son” on something like “Brown Eyed Girl.” And in the wrong key.

As I mentioned in another topic a year or more ago, it is not feasible to maintain 100 logic projects when adding a novel effect to one song means programming a reset of that effect into ninety-nine other projects.

One again, BMT can handle this, as it seems able to handle EVERYTHING. But once I group thirty commands into a timer-blasted preset run on an iterative loop using manually-updated variable iteration, I will need to write my own manual and re-read it for an hour or two each time I dare to touch the system.

Rather, I imagine a separate app running in the background, publishing its own virtual midi port, which takes one of several commands (Song Default, Intermission, Banter, Strike, etc.) and responds with a flurry of time-separated commands. The management for this could be a simple graphical list of devices, ports, and commands under each trigger. OR, it could get fancy and allow for layering and intercombining of scenes. (Like dynamically creating a single macro for performing 'Song B" over “High Impact Sound-Responsive Lighting Show” without doubling up commands.)

With this in place, I could trigger the default song macro with each song selection by setting a universal command in my set list app, or from my Mac via BMT. Voila! All songs start from a known state.

Has anyone seen anything like this in use? I will try to find my previous BMT-centric conversation and link to it for further context, for all your midi-masochists out there. 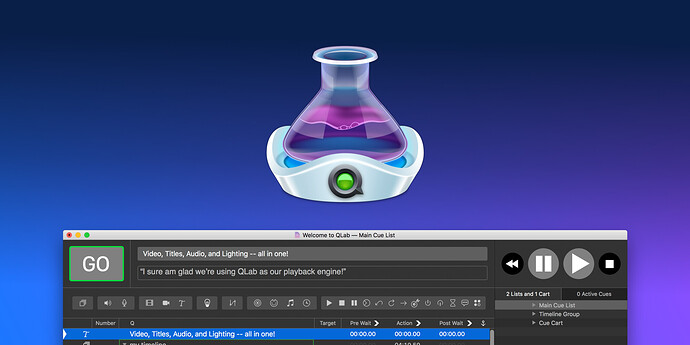 QLab is sound, video, and lighting control for macOS. It’s used by everyone, big and small.

Oh certainly. But looking for a much less expensive solution geared toward a single, simpler task.

Has anyone here used qlab on stage with a daw?

The solution to my questions above ended up being a Mac Mini and Deskew’s Gig Performer software. It handles the tasks of VST hosting, routing, etc… but also manages setlists of songs and song parts, with midi outputs and associated patch changes available at the global, rackspace, song, and song-part levels.

I’ve been running multiple instances of Gig Performer, tied together by BomeNet Pro and Dante, to replace the duties I had previously planned for Logic Pro.

I’ll still be using BMT Pro to control Logic on a separate machine, which will handle multitrack recording and virtual soundcheck functions. There appears to ALWAYS be a place for BMT.

Great to see you found a solution. Yes I just found out about Gig Performer a few weeks ago and it seems like it is a great piece of software for managing songs and controlling plugins.

Yes, it is. I had been searching for this ‘missing link’ for years, and it (along with BomeBox and the most current BomeNetPro) has set me free.