I’m having trouble doing something I think is pretty simple.

I’m trying to get MIDI CC from a Launch Control XL to an Empress Effects Zoia, using MT and Keystep Pro to translate the MIDI.

Am I missing a step? All I did was create a translator that sees an exact MIDI channel and CC input from the USB Midi (Launch Control) and outputs to the Keystep. I tried all different channel setups (on both MT and the Zoia). The Zoia can get CC changes directly from the Keystep just fine, or any non-USB midi controller.

Thanks for your help!

Hi and welcome to the Bome community!

I’m trying to get MIDI CC from a Launch Control XL to an Empress Effects Zoia, using MT and Keystep Pro to translate the MIDI.

In the attached file, I have two translators:

I set up Aliases for the devices which you will need to assign to the actual devices. Since I don’t have your devices, I set them up on my system as follows. 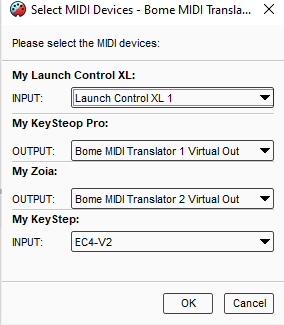 You can get to the assignment menu from the top menu in MT Pro. 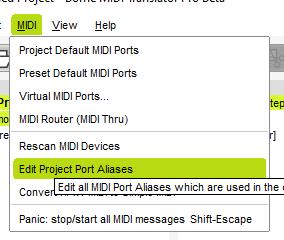 Since there is no thru path for the XL to anything, you need translators for anything you want to send from the XL.

Thank you for the quick reply,

I want to control the effects on the Zoia with the faders on Launch Control XL. I’m using Keystep Pro as my midi interface, not as a controller. I’m hoping MT is the tool I need to do this.

So I got the Zoia to see MIDI CC from the Launch Control XL. However it’s only changing by one CC value, then snaps back to the original value. Is it possible to have the entire CC range be translated? Or do I have to create 128 separate translators? There must be a way…

My guess is on incoming you didn’t set any value as the incoming value and assign it to a local variable like qq. 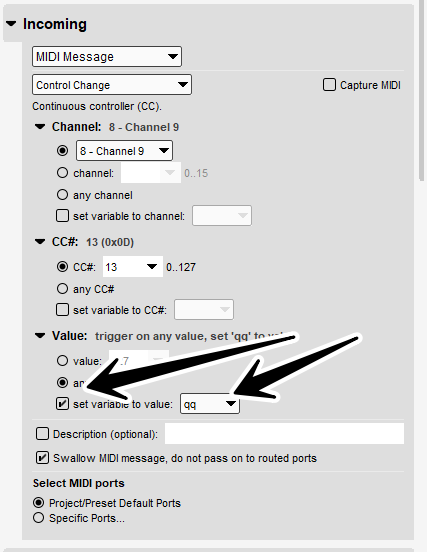 On outgoing, assign the same variable and then any value will be picked up and passed to the output. 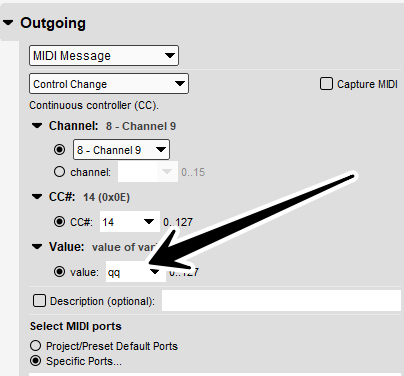 If this is not, the issue, please share your project file and I will take a look.

Worked! Amazing tool. I didn’t understand the double letter variable. But everything works perfectly now. Time to make some music! Thank you so much for the quick replies!

I might try to do a video walkthrough for some of my students. It seems like a pretty good way to teach how MIDI works in both basic and complicated setups.

Awesome. Thanks for letting us know!

If I want to use 2 faders to control 2 different parameters on the Zoia I just create 2 translators that are identical except for the CC#? For some reason I’m not getting the same result, even though the log is showing the correct MIDI out. The Zoia has a MIDI learn function, and it sees the right channel, because the first translator is working.

Is there another step for 2 CC translations?

The Zoia can learn MIDI just fine from the Keystep Pro, so something isn’t converting properly for the 2nd translator. I simply duplicated the working translator and changed the CCs on both the input and output, but not getting anything on the Zoia from that new translator.

That’s my setup. See anything wrong?

I can’t see anything wrong with the 7th or 8th fader. They are working as expected.

However, for any thing that doesn’t have translators, the output will be sent through the MIDI thru path completely untranslated. If you don’t wand this, simply delete the line between the Input and output paths in the MIDI router section.

If you can turn on the log and check “Incoming”, “Outgoing”, “MIDI IN” and “MIDI OUT” and then share the output, perhaps that will help isolate the issue. 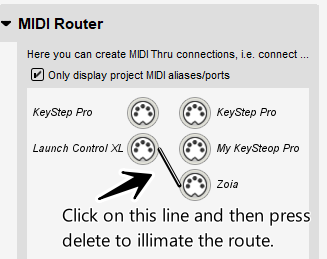 Note that Incoming and Outgoing will capture anything that meets a translator criteria, where MIDI IN and MIDI OUT will show all MIDI whether it is going through a translator or through the MIDI router.

CC 1 as an output works fine for everything. As soon as a switch any translator to a different CC, I don’t get anything.

For fader 9 (which translates to CC 1, the one that is working), I’m getting an addition MIDI IN message on the Keystep, but I don’t know why. It looks like this:

It is possible that MIDI Thru is set on the Keystep. You probably need to turn that off. In the attached version I’ve disabled input from all but the Launch Control XL and all output execept the Zoia (I assume through the keystep interface).

Translators should then only work for MIDI coming from the Launch Control XL and only send to the Zoia.

I’ve also set the source and destination for the translators at the preset level as generally this is best practice. See this tutorial.

I left the MIDI thru route in MT Pro set for items that don’t have translators. If you don’t want anything else to get through, you can delete that route.
XL to KeyStep and Zoia 2 CCs (1).bmtp (1.5 KB)

Still no luck. Must be something to do with the Keystep pro. MIDI thru is off.

Couple observations:
CC 1 is the only CC that’s recognized by the Zoia from the Launch XL. If I change the first translator to output CC 2 (or any other), I get nothing on the Zoia. However, If I switch the keystep to controller mode and use the correct global channel, Zoia sees all 128 CCs from the Keystep.

So it’s not a setting on the Zoia. Also, if I try a different midi interface (I have a Keystep 32 with MIDI out), I get the exact same result. That doesn’t necessarily narrow it down because they are the same manufacturer and might have similar issues. I’ve gone through every midi setting on both. Nothing that I can find makes a difference.

Hopefully I can take another crack at it tomorrow, but I’m almost ready to give up. I appreciate the help!

So maybe the keystep doesn’t act as a MIDI interface at all. That would not surprise me.

Yep that’s it. I found a 15 year old midi i/o and tried it instead and it works fine. So cool. Well now you know if anyone else has the issue. The Keysteps are some of the most popular pieces for dawless setups, and I can see MT being very in demand for that kind of performance. Would the Bome box function the same way? Would I need a midi interface or does it serve that purpose?

BomeBox is a MIDI router and you can hook a MIDI DIN device to the DIN port and multiple USB devices with a USB hub to the USB host port. It will also run MT Pro so if you have a licensed copy of MT Pro, you can upload the project file to your BomeBox and run it that way without a computer.

The BomeBox is also a network router and supports Bome Network if you wan to network various MIDI devices.

I’m glad you got it working!