I’m currently testing Midi Translator Pro to see if it will meet my needs; so far it’s looking very promising - My goal has been to take a cheap MidiPlus SmartPad (which sends Midi Notes) and be able to configure it to send CC and PC.

I’m using it to control a Kemper Profiler and so far I’ve been able to assign the pads to send specific CC and PC commands as I expect them.

The Kemper can also accept SYSEX (or NPRN) and I’m able to capture these and would like to assign them to specific pads.

For example, this is what I was able to capture from the Kemper to turn on and off a specific effect slot.

One thing that I’ve been having an issue with is that sometimes when using my pads to control CC messages; I may have to hit the button twice for it to turn on or off - not sure if there’s a way to avoid the need of that or not.

Since the SYSEX may allow me more flexibility; I figured I’d try to assign some pads to send these commands but the Kemper isn’t responding to them.
I’m not sure what I’m doing wrong but I know it can be done (I’ve done it thru Reaper) so it’s something I don’t have configured right in Translator.

It’d be great if I could just assign one pad and it be a toggle to jump between the two states (on/off).
The only secondary question is that sometimes an effect may already be on when loading that preset - so is there a rule that can take whatever state its already in and do the opposite so it doesn’t require a second press?

For the record; I’m using the MidiPlus SmartPAD via USB to a PC and my output is to a Focusrite Clarett 4PreUSB that’s connected directly to the Kemper.

If you are not sure, please open the log window in MT Pro, check the “MIDI-IN” box and then press a few pads noting the behavior both when the pad is pressed and when it is released.

Note to CC or SysEx message is pretty straight forward. There is more flexibility in configuring if your pads send momentary messages.

The second pare (translators 0.2 and 0.3) handle conversion of note to SysEX with note on sending your SysEX with value of 1 and the other one sending a value of 0 with note on.

The last translator handles a note-on message only and toggle the output of CC64 to 0 or 1 between each press. We use a global variable (ga in this case) to toggle the value to be sent. There are 360 global variables to work with. Discussion of global variable, rules etc can be found in the user manual. You can press F1 or use the help menu and a PDF file will open up for your review.

We also have many tutorials, you can check out.

Thank you Steve.
They are momentary pads (on then off on release)

In my case; I’m using incoming Channel 1, Note 4 to outgoing Channel 16 CC18 for this particular test.

For the first 2 in your example, the Note On and Off to CC - works as expected (effect comes on when held down, off when released given the momentary pads.

I see why the SYSEX isn’t working.
It’s because my output needs to be on Channel 16 and it doesn’t appear that I can configure that as an option when using SYSEX.
When I set my Kemper to Channel 1; the SYSEX works fine.
Unfortunately, I can’t leave it on 1 because in a real world, live setting - I’ve got another device that is already on Channel 1 and it can’t be changed.

The third option; the toggle seems to work best for my setup - now if that can be used with SYSEX on a specific channel, that’d be the answer I think.

The incoming channel from the SmartPad is 1 (no issues there)
The Kemper is listening on 16.
Using SYSEX, I can’t change the outgoing to channel 16 and the Kemper won’t respond to SYSEX.
If I set the Kemper to listen on Channel 1, SYSEX does work.
Is there no way to configure outgoing midi to channel 16 when sending a SYSEX message?
It appears the outgoing channel setting isn’t an option for SYSEX.

It is possible that the SysEX has one of the byte as the channel number. SysEX usually does not include channel information, however. It often includes the “Device ID”. In your case it is probably the 00 byte after 33. Device ID of 7F usually sends to all devices (broadcast). You probably need to check the format of your Kemper SysEx messages to see if one of the 00 bytes can be changed from 00 (MIDI CH 1) to 0F (MIDI CH 16). It is almost entirely up to the vendor how to implement SysEX for their devices.

Ahh… I see. I found this info on the KPA midi documentation; I tried changing that 00 to 0F and it didn’t seem to work. I know almost nothing about SYSEX. Reading it is still greek to me. 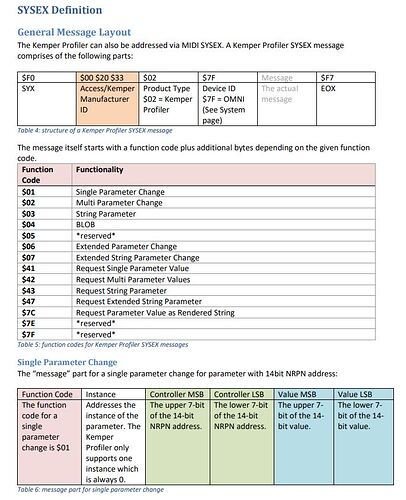 Yes, I saw that too. I’m afraid the documentation is pretty sketchy. I know how SysEX works but as i said earlier, the vendors have a lot of latitude on how to implement it and they often do not document it completely. By definition a SysEX message really should not carry channel information, however there is nothing prohibiting it and there is no real standard if it is there. My tact at this time would be to experiment with different 00 pairs. I would start with setting the device ID to 7F.