Hi there, I also have a Rekordbox and a Pioneer product. I tried to follow these suggested steps but one time I start BOME I can’t no more get the Rekordbox find/recognize the connected DJConsolle, how to resolve?

Hi,
What Pioneer Product are you using? If you are using MIDI only, you will need to use the MT Pro MIDI router to route to and from your controller to a virtual port and then in RekordBox instead of trying to access the DJ Controller directly, access through a virtual port. Especially if you are on Windows which only allows one application to access a given MIDI port at a time.

Sorry @SteveC but i’m still a beginner with these stuff and have no experience, can you be more specific telling me exactly which software you mean and each step to do it?

And anyway I think I had more than one thing in common with the previous user’s request, because I also need to remap the knob that actually ‘Browse’ function within Rekordbox to navigate between the tracklist SO instead of using this Knob I would use instead a 2 PAD buttons (on the same DJController product) one for UP and one for DOWN.

Try the attached. I set up 4 alias as follows. You will need to set up your aliases for your controller.
Also notice the MIDI routing. In Rekordbox with this settings, you should see your DDJ-400 as “BMT 1” so you need to look ad BMT 1 instead of your DDJ-400. 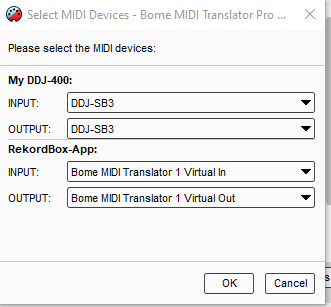 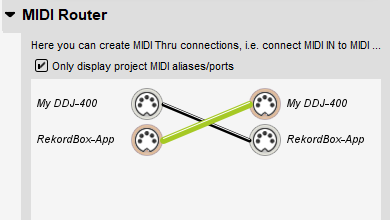 Indeed your question was similar but tied to a different controller which is why I opened a new thread, if you think of users research on our forum, they might otherwise have to weed through a bunch of messages to get to what they are looking for so it is always better to segment these discussions to help users find things quicker.

I was just thinking. Pioneer often tightly integrates their controllers with their software. It is possible the RekordBox will want to open the DDJ-400 directly if attached to your computer (especially on Windows) which will mean no other program (like MT Pro) or device can open it. If this is the case, it is possible that you might have to use a different MIDI controller to operate the arrow keys with MT Pro. If your software has a settings to pick a different MIDI port, you are probably OK. If not, you might need to pick a different MIDI controller and program it using MT Pro to send the keystrokes you want.

Short of getting into the guts of Windows and renaming the original DDJ-400 port names and also adding new ports under the old names, there is nothing that can really be done that I’m aware of.
Even doing that might break other things because I think the port names assigned are not only for MIDI but of other functions (Audio and HID).

I suggest you get an inexpensive MIDI controller and use that in addition to the DDJ-400 to handle the browser functions.

I don’t know how but searching I found a software called loopMIDI and did some step forward.
I was able to setup manually a port named PIONEER DDJ-400 and configured it also in Bome, in this way Rekordbox was able to see it as “his” device and activate the MIDI button and also the UP and DOWN (PAD) buttons seems to work…
BUT the “only” issue is that now Rekordbox is very SLOW if feels like the MIDI ROUTING it slow all things and apart the UP and DOWN things if I click for example PLAY it takes so long.
Infact in Monitor log of BMT1 I can see there is a continuos sending of packets IN/OUT…
This is a screenshot of the actual config: http://puu.sh/HDoZc/dfcae4485f.png
Let me know if there is something that we can do or at this point it’s just a loose of time, thanks!

Yes, providing the same port name as the DDJ-400 partially works, but as you say, when you plug in the real DDJ-400 there is now a naming conflict so I don’t think RekordBox knows which port to access. As I said, Pioneer tightly integrates their controllers so without getting into the guts of Windows drivers, I’m not sure you can do what you want to do with just the DDJ-400 controller.

Yeah, I think i tried every thing I could all yesterday and this morning. Can’t hide that I feel a little bit frustrated as I was so much excited and pretty sure that your software could do the trick and unfortunately didn’t happen.
So thank you very much anyway @SteveC for your time, I think I’ll do as you said as it was already in my mind before start looking here, to use just a cheap MIDI controller in addition to my DJController.

Yes, I’m pretty sure you could get things to work with a different DJ application other than those provided by Pioneer. Again they tend to tightly integrate their applications and hard code them with the controllers that they sell, The limitation here is not with Bome MIDI Translator, rather with the application.

In case it’s helpful, it seems possible on mac via the Audio MIDI Setup app, since you can rename MIDI devices (apparently MIDI devices and MIDI ports are very different things in Windows).

Prior to spending the last 4 hours attempting to accomplish the above question and landing on this page to my dismay, I started with this tutorial that lays out how to use Rekordbox with a non-Pioneer DJ controller: How To Hack Rekordbox DJ To Use Any Controller's Jogwheels - DJ TechTools

That said, if anyone else has any ideas of how we can rename MIDI devices on Windows, I’d be incredibly thankful – been trying to figure out how to send MIDI signals to Ableton while scratching audio in DJ software for like… a decade with no luck.

how we can rename MIDI devices on Windows

You can use Bome Network for this, it has custom named virtual MIDI ports which can be used to trick software into detecting a specific MIDI device.
https://www.bome.com/products/bomenet

You can use this upgrade for unlimited named ports: