Hi, I ran into a problem with FL Studio’s ‘Receive Notes From’ feature.
It’s supposed to let you lock one controller to one instrument and not have to focus or select that instrument to play it. You can even select a certain channel for it.

So in the KK editor I set up my NI S61 to send a Harmor preset on channel 2 and DirectWave on channel 3. I kept the first preset as ‘FLS’ to be the standard output so whatever other instruments are currently selected can be played by that channel. It outputs on channel 1. Technically this should work no problem. I should just switch the preset, the keyboard sends a different channel and I can play that instrument. 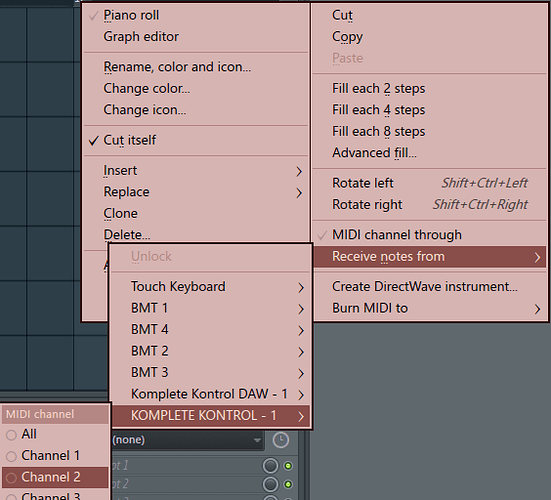 The trouble is Image Line buggered this up too. When locking a MIDI controller to an instrument, it locks out the entire instrument from being used by any other instrument. So if I want to use the keyboard on channel 2 for Harmor, channel 1 doesn’t work for anything else at all. Fantastic.

Just a shot in the dark here. Was wondering if you knew a trick of maybe tricking FLS to make this work. I have MTP’s virtual port to use, but it’s proving tricky. The There are three NI drivers and they all have a mind of thier own, so the MIDI mode isn’t lower level use. It still has hardwired things like the light guide that still work how NI set it up. So anything I’ve tried so far hasn’t worked.

Wondering why MTP can’t suppress outgoing messages either. Isn’t that what ‘swallow message’ is for? I have lots of buttons set up that just click on stuff, they don’t need to be linked to anything, but it still gets sent to FLS. Why can’t MTP simply stop a message after execution? Even when I disable its output entirely and set the translator output to none, it still sends it.

Looking through your notes, you might be getting confused between “channels” and “ports”.
It appears that you don’t lock and instrument to a MIDI Channel yet you lock it to a midi port instead. This means in MT Pro you should probably direct output for each instrument to a different MIDI port (BMT 1 - BMT9). That way MIDI Channels should not matter.

As far a Swallow in MTP it only works if:

Since the action is skipped, swallow will not work.

You have two options

Also pay attention to the output devices at the preset and translator level. If you show me an example of what is not working, I can show you how to fix it.

So the NI S61 has its standard mode for use in KK and Machine. Then it has a MIDI mode. You can switch between these modes with the dedicated button.
The standalone KK plugin has the editor built in so you can configure what the MIDI mode does.
This is great because IL plugins aren’t partnered with the NKS standard or Akai’s VIP maps, so I can build presets for my favourite IL plugins. 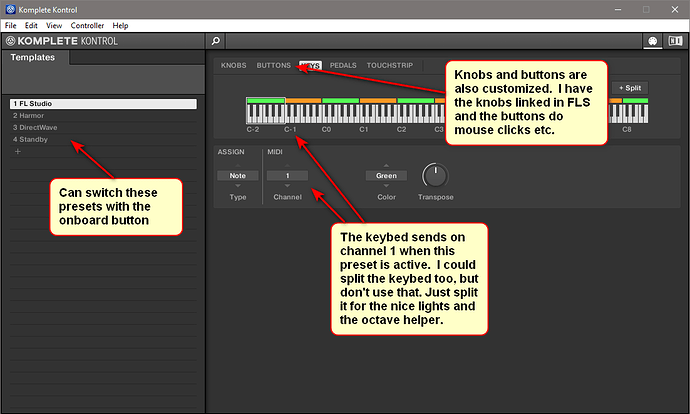 So in MIDI mode, FLS is receiving from that driver. It has to be on one single port. So I can’t switch the ports to solve this problem.
I’ve tried to disable that driver and run it through BMTP 3 instead, but that didn’t work.
I tried to run only the locked instruments through ‘BMTP 3’ and everything else through ‘S3 - 1’ but that isn’t working. 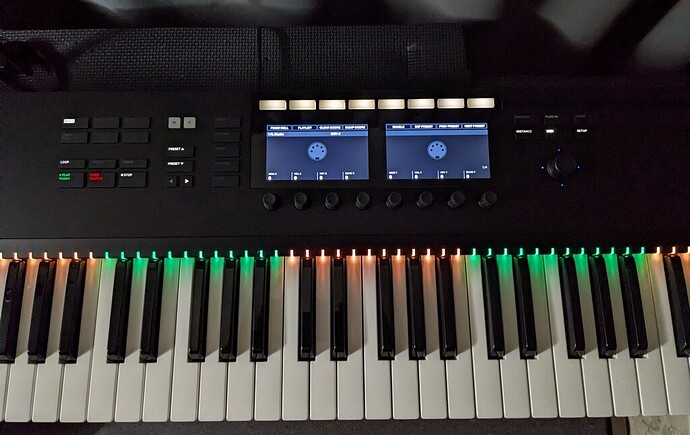 I’m hoping there is just some little thing I’m overlooking. Or a trick that I can keep my channel 1 open for any instrument in FLS, and just hit the preset - + buttons to instantly play Harmor or DW right from the keyboard. I’ve already given IL crap about this in a tech support ticket (the only way I can talk to them now), but not sure if they will see this my way.

Are you saying that there is a piece of software between your hardware controller and the MIDI port that talks to FL Studio? If this is the case, then MT Pro should connect to the MIDI port exposed by that driver instead of directly to your controller. You can then set up multiple Virtual Ports from MT Pro to FL Studio and use translators or MIDI routing function to send to different BMT ports which should be recognized by FL Studio

The key is that on Windows, only 1 port (virtual or physical) can be accessed by a given MIDI application at the same time, hence the additional virtual ports. So you need to decide which ports to use by FL Studio and match them to the appropriate port in MT Pro.

You might also need to match the ports MT Pro uses to talk to your hardware device especially if there is software connected to it.

The software is just for setting up the MIDI config. It’s actually the same software for using its main mode, the Komplete Kontrol plugin. Only the standalone vst works as the editor (Similar to Novation’s ‘Components’ program). Running it in FL Studio is different. It doesn’t have an editor section. When exiting the standalone plugin, editing is done and it runs on the three drivers that are always running on the computer, in the background.

I’ve tried what you described but the preset buttons don’t send any MIDI message. None of the buttons on the left send anything (except transport controls, through the S61-DAW driver). NI didn’t open them up for use in MIDI mode. We’ve talked about that on the IL forum. There is a good python script made for the keyboard, but I don’t want to go near it. The light guide doesn’t care what MTP tells it to do; that’s why I called it low level. I have to configure it in the KK editor only.

So I have no way of switching the MTP presets. Except to only use one NI preset and use the screen buttons for MTP preset switching, and using ports. But the light guide doesn’t care about MTP; I don’t get different keyboard lights. I would also lose 2 of my 8 possible buttons on all three presets, on all pages. So I would lose 24 buttons that I’ve already set up. So either I don’t get light guide config and all buttons, or I don’t get quick locking channels.

I also have only one virtual port that I can spare for the S61. The other ports are being used by my other devices. MTP can only have four. I’ve tried utilizing the MCU driver (S61 - DAW) for it, but that only frog jumps the issue onto a differently named driver. It’s only designed for transport etc. anyway.

If FLS would just not lock out channels, this wouldn’t be an issue at all. NI makes fantastic MIDI modes (the reason I knew to buy the NI dj controller), but IL MIDI integration is so bad it makes me want to just lay down and cry.

Yes, I really can’t fix FL Studio issues. The best we can do here is try to figure out how FL Studio behaves and look for workarounds with other hardware/software. If pressing button on your S61 doesn’t send MIDI then there is no way to flag MT Pro that a preset, channel or routing should be changed.

Ya, that’s what I feared. The KK editor doesn’t have a port switch either, just channel switch.
Image Line did fix a problem about links that I reported from before, so maybe they will update this too.
I’ll keep fiddling with it to see if I can find something.

I’d play with it if I had a S61. But then if I did, I’d have to get rid of something else in my studio as it is quite full right now. I still have a few MIDI keyboards that I need to unload.

You got me excited about that. It still doesn’t work.

Rats, it seemed to work for me but maybe I did something wrong. I’m not a FL Studio expert.

So it’s behaving differently because I have a different keyboard? Hmm, maybe I’ll ask NI.
And I will tell IL a different keyboard works on channel 1, maybe they will know something I don’t.
It’s a real disappointment after working this hard to set things up and really dumb things like this get in the way.

I can solve this by running the keybed through my MTP 2 virtual port, for the instruments I want to keep locked.
But I’m struggling with mapping the keybed. I keep getting stuck on notes. Sometimes the notes turn off and sometimes they don’t. I don’t know what I’m doing wrong.

If I only set up the one note, I noticed in the log window that tapping the key gently doesn’t register a note off input. If I hold down the key or hit it harder I get a note off.

On both note-on and note-off set MIDI In to “any velocity”. That should get rid of the stuck notes.

Oof wow I love you

Now it works. I can play any instrument on my first preset, and just push the preset - + buttons wherever I am in the daw and play my main instruments! Ha