Hey all, I’m new here, and hope to learn fast

Been looking around and would really appreciate some pointers to the following:
I’m using VCommand to control Access Virus C in Cubase.
For this I need to create quite an elaborate (for me as a beginner) rounting scheme.
I have the connections marked for CopperLan but I preferred paying got the Translator Pro
and do this the best possible way.
Could someone assist me in my trying to translate the following into Translator lingo?

Hi, and welcome to the Bome Community!

I haven’t used CopperLan in years primarily because at the time it took over all MIDI ports which locked ports from use by Bome MIDI Translator on my machine. Since you are using CopperLan, I assume you have MIDI devices on different computers within the same network? If this is the case, you will need to continue using some soft of network MIDI. Bome has Bome Network Pro for this.

Now it looks like you are taking a single physical MIDI port ( Unitor AM8-Port ) 1 and you want to send it’s input to 2 separate tracks (Vmidi1 and Vmidi2) with different filters for each track. You also want to take those two track outputs (Vmidi 3 and Vmid4) and recombine them going back to the original MIDI port ( Unitor AM8-Port ). Is this correct?

Then in Bome MIDI Translator Pro, write the necessary rules for MIDI translating, filtering, etc for each Bome Virtual Port.

Again, when I used CopperLan, it insisted on taking over all MIDI ports so I had to de-install it and use Bome Network and Bome MIDI Translator Pro instead. Since this was some years ago, perhaps CopperLan now less insistent on taking over MIDI ports.

The following example is a simple MIDI template with 4 presets. The inputs and outputs are defined at the preset level so any translators you put within a given preset will only effect the assigned inputs and outputs for that preset.

Right now, I have no translators defined so there will be no input or output You will need to either define translators or MIDI thru paths to actually use the template.

For defining MIDI thru paths, simply draw a line from the desired input to the desired output. Any translators with swallow set, will override the thru path as long as the output of the translator triggers. 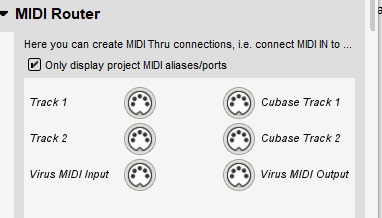 In Cubase you would set up your inputs and outputs as BMT 1 and BMT 2.

My aliases are defined as follows, however i just used a different Virtual Port for Virus MIDI since I don’t have your controller. 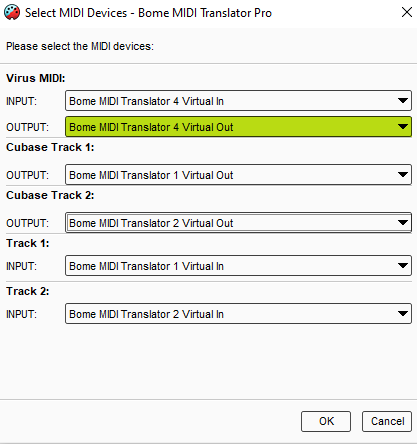 I hope this gets you started.

Hey Steve
First of all thanks for taking the time and answering in such a detailed and understandable manner.
Really appreciate this!
Yup - I had the same experience with CopperLan, so I simply uninstalled and purchased the Bome Midi Translator Pro.
My use case is really simple and you’ve actually helped a lot, and now it’s up and running, so thanks!

One question: In your midi router screen capture you actually named 2 connections “Cubase”. How’s that done?

Click on the title of the project, right above the presets. On the right will be 3 sections

In the bottom area of input and output you can create aliases. Give it the name you want and then assign it to a physical port. I almost always do this as if your physical port names change you can always just re-assign the alias than go through many translators to redirect to the new physical ports.

See this tutorial on aliases.