Has anyone managed to get a Novation SL Mk3 to connect and exchange data with its librarian application Components when connected through a Bome box? If I plug my SL mk3 to the Bome box host port (through a USB hub) I can see its ports on the Mac (although with different names) and use the keyboard with a DAW etc. However if I try to use the Components librarian software the SL mk3 appears to connect but fails with an error when I attempt to transfer data between the keyboard and Components.

I’ve also emailed Novation support about it, waiting for an answer.

Hi Bruno, I haven’t tried but I can give it a try tomorrow. I know a lot of vendors require direct USB connection so I suspect it might not be updating with pure MIDI. I have some controllers that I can update through their editor on devices on BomeBox but that is usually the exception since the editors often have handshake that happens outside of the MIDI world.

I was able to get Novation Components (Stand Alone Windows) to work with my LP MINI MK3 but I had to do a few things to make it work.

I then tried it with the web version and it works fine as well.

Really unless you are going to be programming your device as you use it I would not recommend doing this as it was a bit of trouble to set up but it seems to work. Also if you are running other apps that use these ports Novation Components would probably not be access these ports while in use with the other application). Also note, that the Remote MIDI Direct ports still show up, however I don’t use them directly. I was just leveraging the custom naming feature of “Unlimited Virtual Ports”. I think Novation components insist on the exact name.

Thank you so much Steve. Unfortunately so far it doesn’t seem to work. I get the green connection icon (I was getting it even before making any changes) but the data transfers all fail.

It could be that I’m not getting the port names right. In MIDI Monitor they show up in the format:

In Ableton they show up as:

And in Apple Audio MIDI setup as:

I’ve tried two of these options so far (haven’t tried the Ableton format). I haven’t gone further because I noticed that today one of the ports is actually marked as “Pending” in the MIDI Ports page. I’m not sure why, it used to connect OK. But it’s the CV/Gate port that I am not using at the moment so it isn’t impacting my workflow.

I’ll see what Novation Tech support tells me if/when they reply to me. It’s not a deal breaker for me, only a pain to unplug/plug/unplug/replug the keyboard every time I want to make a change.

I’ve bought both the Unlimited MIDI ports and MIDI Translator Pro now so I’ve got a lot to learn (for example, what are the unnamed Virtual MIDI ports in the Network Tool? (see screenshot) Can I delete them?). I’m sure I’ll have many many more questions, thank you for your patience!

BTW is there a library of example MIDI translator pro projects that I could examine? I tend to learn best by looking at examples.

Thank you so much for your fast responses. I have to say the responsiveness of this forum has been a major factor in me deciding to buy Bome products. 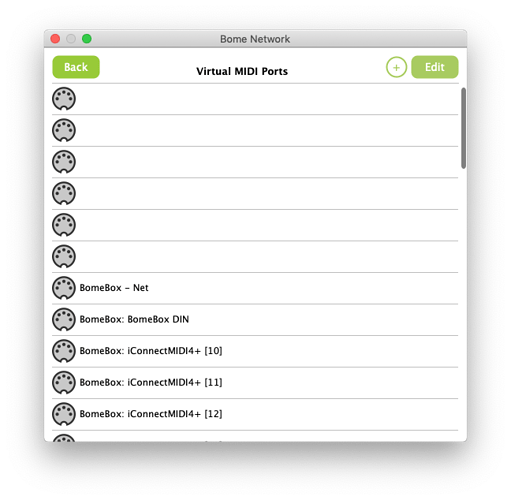 The un-named ports is some sort of anomaly and should be deleted.

It may be showing as some ports being pending. If you have removed and recreated a virtual ports. Bomebox creates some as well so what I would suggest is you disable all MIDI remote ports after disconnecting BomeBox. This will delete them.

Then reboot your computer and your BomeBox so you get a clean view of Remote MIDI ports and then you can create your named ports and routing as I suggested. I tested with sending a configuration so yes it works (at least with the LP MINI MK3. I would pay attention the the port names reported by the OS (maybe using MT Pro or MIDITools or some other app) and not use the names shown by Ableton Live which may show differently. I tested on Windows but if you are on Mac, I guess I could test that as well.

Also I would test with the local components tool and shut down Chrome which sometimes likes to keep MIDI ports open so they may show as pending.

Thanks for the kind words!

I had to create 4 virtual ports

Then set up routing as follows:

I then tested with the downloaded (local) copy of Novation Components. Interesting that on the Mac, I had to create 4 virtual ports and only us 1/2 of them.

Thank you. I think I did the right thing but it still doesn’t work. I also tried with the SL MkIII plugged into a powered USB hub (which is plugged into the Mac) and I got the same error so it could be an issue with hubs and the SL MkIII. I have emailed Novation, let’s see what they say 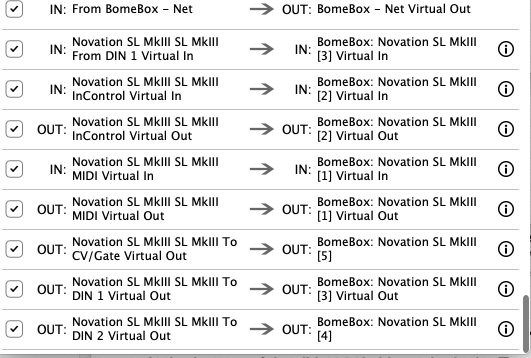 I don’t think you have it right. Please use MT Pro or something to show me the port names they use when plugged directly into your Mac.

I think you will have 3 outs to outs (from BomeBox to your Mac) and 3 ins to ins
From you Mac to BomeBox). This would be on top of the routing that is done automatically by BomeBox.

The port names that you see by your Mac should not show the name Virtual Anywhere, that is only within Bome Network Pro.

Don’t add any other routes for this controller. Just the 6.

The SL MkIII has 3 IN ports and 5 OUT ports (actually two of the OUT ports are OUT only). This is what it looks like when connected on the Bomebox:

As a result 2 of the ports (4 and 5) do not get an automatically created Virtual port to connect to.

These are the ports as they show in MIDI translator pro when the SL is plugged straight into the Mac: 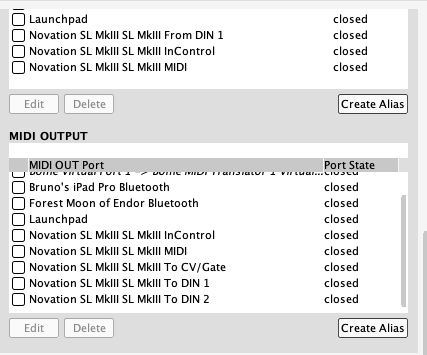 So Leaving the DIN ports alone:

And of course, when you create the virtual port names, enter them exactly as shown in MT Pro (without the Virtual Designators)

I might have port 1 and port 2 reversed. Generally port 2 is the “InControl” port.

Thank you for all the ideas. I do believe port 2 is InControl (tested it using the MIDI monitor).

I tried with port 3 mapping both to DIN 1 and to CV/Gate. Both keep on giving me an error when trying to transfer data. Here are the configurations: 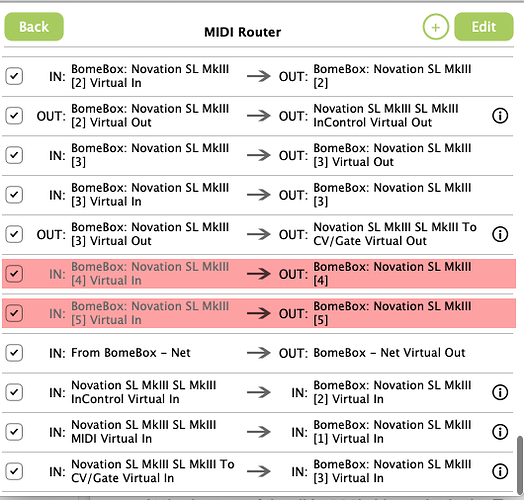 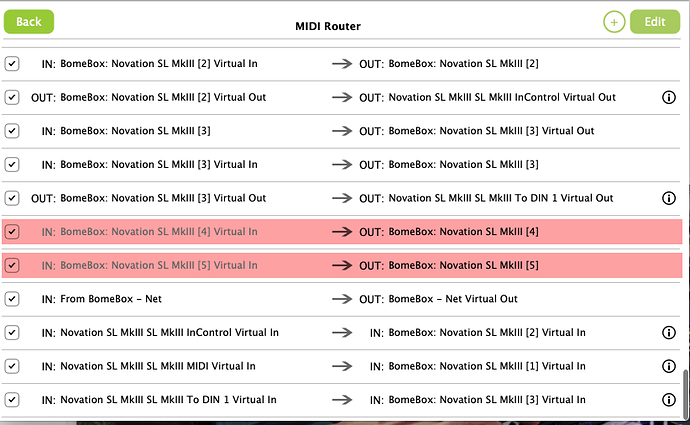 I also tried bypassing the USB hub attached to the Bomebox and plugged the SL straight into the Bomebox. It also didn’t work

Must be some weird stuff with the SL MkIII

Again, pay close attention to IN: and OUT:

Actually I was just looking at the red ones which look wrong. Those should be deleted. The others look OK.

I would disconnect all ports, then reboot your BomeBox and Mac and try again.
Sometimes adding and deleting ports has strange side affects.

Tried unchecking the red routes (they cannot be deleted as the ports are OUT only). Disconnected all ports, disconnected Bomebox, rebooted Mac and Bomebox, reconnected only the SL MkIII ports. Sadly still not working 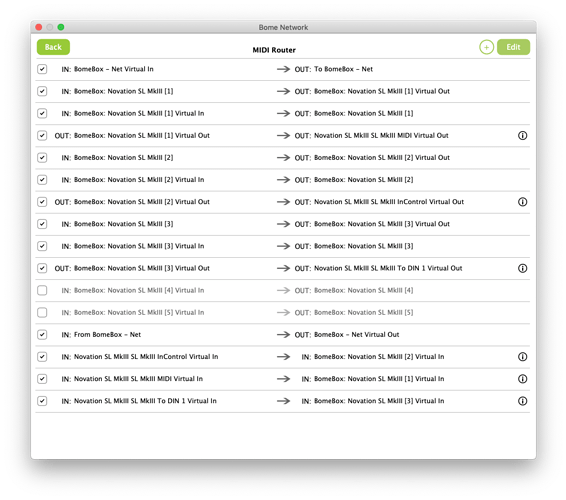 Yes, too bad Novation Components doesn’t have an option to pick the ports.
There may be other things at play here too. Maybe the SL uses more than MIDI to configure it.

Let’s see what they come back with.

Maybe you cannot delete the red routes but you should be able to uncheck them.

I got an answer from Novation. Relatively scarce but they confirm the SL mk3 and components interact using complex sysex handshaking.

They also recommended to clear any “ghost” SL mk3 images in AppleAudio MIDI setup. Doing this allowed me to do data transfers when the SL is plugged in a USB hub (which were failing before in the same way as with the Bomebox). Unfortunately it’s still not working with the Bomebox. I’m going to try different combinations of virtual ports now that I know the “ghost clearing trick”.

But I’m wondering whether there’s a way to use MIDI Translator Pro as a 2 way MIDI stream monitor to spy on the sysex exchanges and try to debug things.

Yes, you could always set a MIDI Thru path in MT Pro and monitor the path between the Remote MIDI direct ports on one side and your Unlimited Virtual ports on the other.

Are you saying it also doesn’t work if you are plugging in a USB hub directly on your Mac instead of a direct connection? There must certainly be something else going on here. If they use pure MIDI for communications, there should be no reason why it shouldn’t work as I confirmed this with my Launchpad MIDI MK3.

Yes there was definitely something else going on with the way the SL interacts with MacOS and USB that messed up the various tests. Novation support told me how to deal with that by clearing the Mac’s USB MIDI “cache” (so to speak) so it now works when plugged into a USB hub, whereas it was not before (of which I was not aware).

Now that I know that I’m going to try again from scratch and see how I fare.